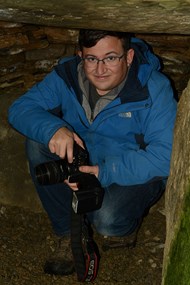 Hugo Anderson-Whymark joined the Scottish History and Archaeology Department in spring 2018 as Curator Prehistory (Neolithic). He holds responsibility for the Palaeolithic, Mesolithic and Neolithic collections.

Hugo gained a BSc (hons) in Archaeology from the University of Leicester in 1997 and a PhD from the University of Reading in 2007 for a thesis entitled ‘The residue of ritualised action: Neolithic deposition practices in the Middle Thames Valley’. Hugo has worked as a freelance stone tool specialist for numerous commercial companies across Britain and as a Post-Doctoral Researcher on various projects. The latter include the Kilmartin Glen Rock Art Project directed by Dr Andy Jones (University of Southampton), Stepping Stones to the Neolithic directed by Dr Duncan Garrow (University of Reading) and Dr Fraser Sturt (University of Southampton) and Working Stone, Building Communities: Technology and Identity in Prehistoric Orkney directed by Prof Mark Edmonds (University of York). The latter produced a substantial web resource (www.orkneystonetools.org.uk) on Orcadian Mesolithic to Bronze Age stone tools and the history of collecting. Hugo has also been a Lecturer in Archaeology at the Archaeology Institute, University of the Highlands and Islands, Kirkwall and at Bournemouth University.

He also has a strong background in field archaeology and has worked on numerous commercial and research projects, including the Ness of Brodgar, Orkney and the Stonehenge Riverside Project, Wiltshire.

Hugo also holds research interests in the application of digital technologies, particularly applications of photogrammetry for the recording, analysis and dissemination of archaeological sites, monuments and artefacts.

Note: prior to 2011 Hugo Anderson-Whymark was known as Hugo Lamdin-Whymark.