Gold object of the week No. 10

This week’s choice is a magnificent gold bar torc that was found, remarkably, on the seabed in the Minch, between the Isles of Lewis and Skye, off the Shiant Islands in the Hebrides. It dates to between 1400 BC and 1100 BC – the Middle Bronze Age. 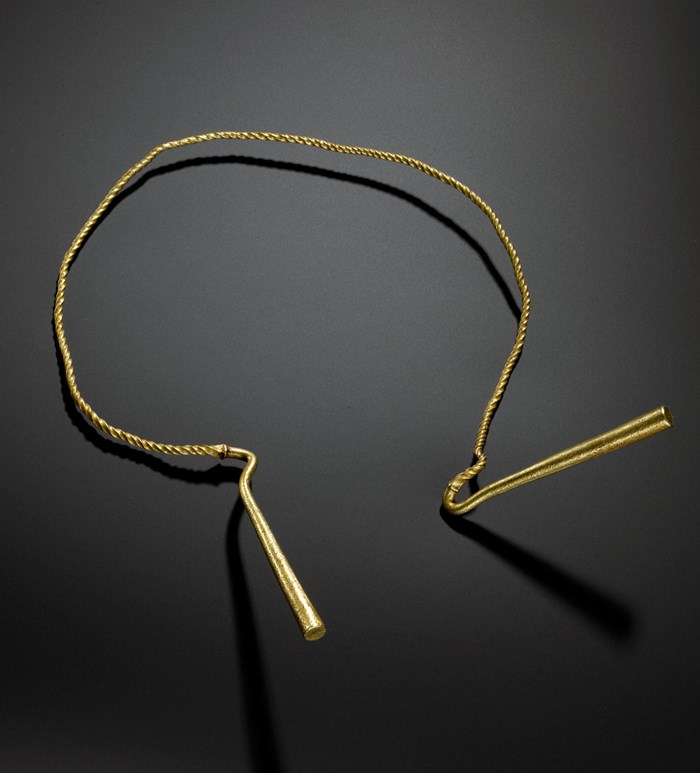 This ‘one in a million’ find was discovered in 1991 by fishermen, during scallop dredging. When the dredger dragged it up, at first the skipper of the boat thought it was an old bedspring and tossed it into his toolbox. But, by happy chance, a year later he spotted something similar on BBC’s Antiques Road Show and took the object to Christie’s in Glasgow, where a member of staff redirected him to National Museums Scotland where it was identified by Trevor Cowie. The torc was claimed by the Receiver of Wreck and allocated to National Museums Scotland and the crew received a reward. It has been on display since 1998 in the Early People gallery in the National Museum of Scotland.

The torc is made of a solid bar of gold that had been carefully twisted by a highly skilled goldsmith. The long straight ends have kinks that allowed the torc to be fastened around the neck of a very important person.

Bar torcs represented a novel kind of gold jewellery, their technology and shape contrasting with the sheet gold that was used during the Copper Age and the Early Bronze Age and which has been featured in previous ‘Gold object of the week’ posts on the Knowes of Trotty discs, the Harlyn Lunulae and Culduthel wristguard rivet caps.

They come in various sizes, with some, like the Minch torc, probably designed to be worn around the neck, while others may have been for the waist. You can see some examples (along with other kinds of Middle Bronze Age torc) in the British Museum’s online guide to its European Bronze Age gold collections.

Just over 90 have been found in Britain and Ireland – mostly in eastern Ireland and in Britain south of the Humber-Mersey line – with a scatter in France and Spain. The four Scottish examples had probably been acquired from Ireland, and although the Minch torc has been analysed, we are still not certain whether it had been made of Irish gold, or indeed of gold from several sources; further research needs to be done.

These torcs contain a hefty amount of gold. Most weigh over 100 grammes and the Minch torc is no exception, at 139 grammes. But some are true heavyweights: the ‘Great Gold Torc’, discovered in 2015 in a ploughed field in East Cambridgeshire, weighed in at a massive 732 grammes and it takes pride of place in Ely Museum. But even that is not the heaviest: an old find from Pattingham in Staffordshire allegedly weighed 1100 grammes! Tragically, that one was melted down. But these ostentatious and precious pieces of jewellery tells us that a considerable amount of gold was available during the Middle Bronze Age, and that certain people were able to get access to it. We assume that these torcs would have been the preserve of the highest echelon of society. Some appear to have been deposited deliberately, perhaps as gifts to the gods.

But what about the Minch torc? How did it end up on the seabed? Was this a votive deposit? The last remnant of a tragic shipwreck? Was it stolen by the mythical Blue Men of the Minch? Or was this the outcome of a particularly unfortunate case of sea-sickness? We shall never know (although the first two are thought to be the most likely explanations). But the torc has attracted a lot of attention, and it even features in Adam Nicolson’s book, Sea Room – an Island Life in the Hebrides, first published in 2001 and now in its ninth edition.