Update: The Declaration of Arbroath display has been postponed until further notice. We will make a further announcement once new display dates have been agreed.

2020 marks the 700th anniversary of the Declaration of Arbroath, one of Scotland's most important historical artefacts. To celebrate, the famous document will go on public display for the first time in 15 years at the National Museum of Scotland.

The Declaration is a letter dated 6 April 1320 written by the barons and freeholders of the Kingdom of Scotland to Pope John XXII. The letter asked the pope to recognise Scotland's independence and acknowledge Robert the Bruce as the country's lawful king. 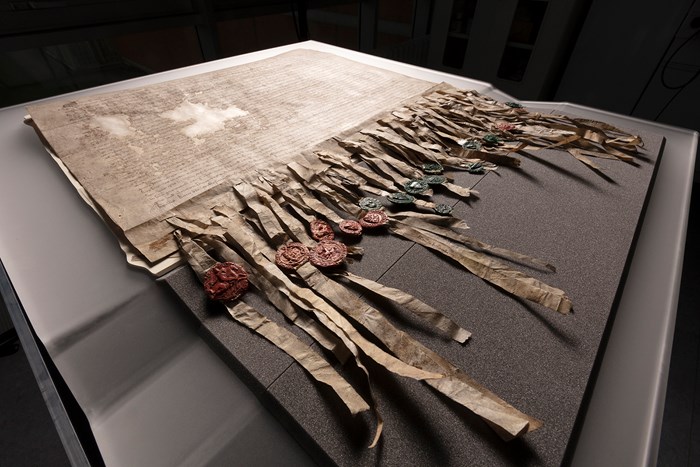 Above: The Declaration of Arbroath © National Records of Scotland.

Despite the Scots' success at Bannockburn, Robert I had not been recognised as king by either King Edward II of England or the Pope. At the time, the Pope desired peace between England and Scotland so that both kingdoms could help in a crusade to the Holy Land. The Declaration sought to influence him by offering the possibility of support from the Scots for his long-desired crusade if they no longer had to fear English invasion.

Written in Latin, it was sealed by eight earls and about 40 barons. It was authenticated by seals, as documents at that time were not signed. Only 19 seals now remain.

The surviving Declaration is a medieval copy of the letter, the original having been dispatched to the pope in Avignon. It is cared for by National Records of Scotland and is so fragile that it can only be displayed occasionally in order to ensure its long-term preservation. Don't miss this rare opportunity to see it.

Find out more about the Declaration of Arbroath