Possibly the oldest in the world, this pitch drop demonstration is also one of the slowest science experiments ever created and proof that good things come to those who wait.

The pitch drop demonstration was set up at the Royal Scottish Museum workshop in 1902.

This pitch drop demonstration was made here in Edinburgh at the Royal Scottish Museum workshop in 1902, designed to show the fluidity of a ‘solid’ substance known as pitch.

Pitch is a tar-like by-product of crude oil distillation. Although it appears solid, by watching drops of pitch slowly form and drop from a funnel, scientists have measured and proved its unusual liquid properties.

The oldest pitch drop experiment on record was set up at Aberystwyth University in 1914. Our experiment is 12 years older than that and may well be the oldest in the world. 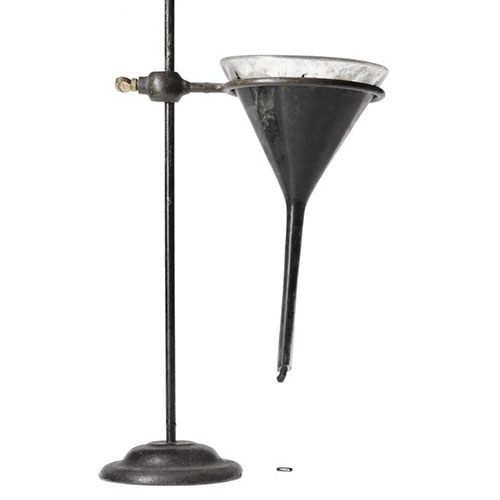 Above: A funnel containing pitch clamped to a stand, made in the Museum in 1902.

If you can smash a substance to pieces with a hammer, then it must be a solid. Right? 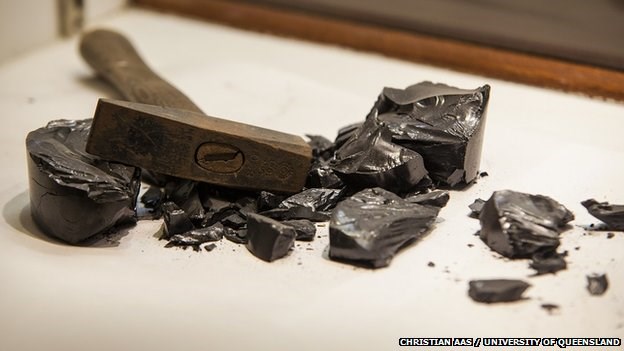 Above: Pitch after being hit by a hammer.

Surprisingly, this isn’t always the case. Although currently used for tarmacking and being smashed by hammers, the debate over pitch’s molecular structure has a long history. As early as the 1880s, physicist Lord Kelvin was creating experiments at the University of Glasgow to show that pitch flowed like a liquid – albeit at very slow speeds.

In the late 19th and early 20th centuries, researchers at universities across the world were keen to further Kelvin’s research and the pitch drop experiment was born. Some pitch drop experiments involve pouring a sample of heated pitch into a sealed glass funnel. Once the pitch has had time to cool and settle, the stem of the funnel is cut and the long wait begins. Or, as in ours, lumps of pitch are placed in the funnel and gradually coalesce and flow.

The most famous pitch drop experiment was set up by physicist Thomas Parnell at the University of Queensland in 1927. During 88 years, the funnel has only dripped nine times. It currently holds the Guinness World Record for longest continually running laboratory experiment and was awarded the Ig Nobel Prize in 2005.

Another pitch experiment was set up at Trinity College Dublin in 1944. While less famous than its Australian counterpart, the Trinity experiment was the first to capture a drop of pitch falling on camera. You can see a time-lapse video of the drop below.

These experiments have helped to show that pitch belongs to a group of substances known as 'glasses’. At room temperature, glasses are hard and seem solid. However unlike water and other liquids, which freeze when cool enough, glasses are just extremely viscous. They appear solid because they steadily slow and stiffen when cool. However, the oldest window glass has not been around long enough to flow.  These experiments show it would take billions of years to see flow in a glass window.

When will the next drop fall?

The simple answer is: we don’t know.

Since 1902, the experiment has dripped at least twice but it’s impossible to predict when the next drop will fall. One drop fell between 4 and 6 June 2016, shortly after we moved the demonstration from our Collection Centre to its new home at Chambers Street. However, we can't tell if it was hurried along by the motion of the move, or if it would have fallen anyway - inanimate objects can be so malicious sometimes! While other pitch drop experiments show movement roughly every ten years or so, our experiment has a narrower funnel which means the pitch moves even more slowly. Unfortunately, over the last century we haven't kept data like the experiments in universities, and don't know exactly when the previous drop fell, or indeed if there has been more than one drop before this which would help us predict the next one.

Even if a drop of pitch did fall, there’s no guarantee anyone would be around to see it. Take John Mainstone, who inherited the Queensland pitch drop experiment in 1961. Under his care, five drops fell but Professor Mainstone missed all of them. The pitch experiment makes no allowances for weekends (1979), conference coffee breaks (1988) or broken video cameras (2000)! 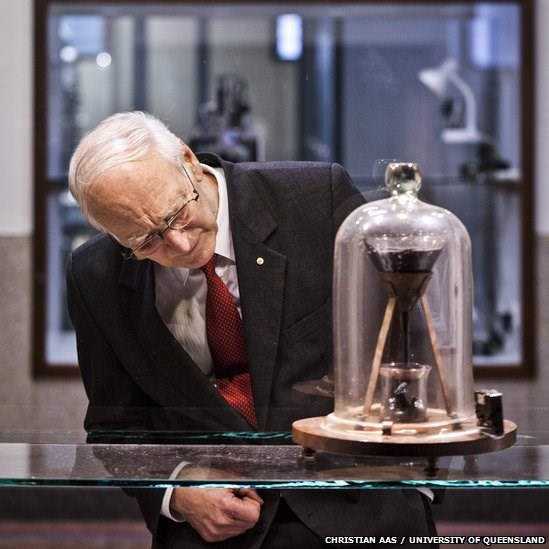 Above: Professor John Mainstone with the University of Queensland pitch drop experiment.

Eighty-seven years after the Queensland experiment was set up, another drop fell in April 2014. This drop was witnessed by three webcams and thousands of online fans. But not Professor Mainstone, who had died eight months previously without ever seeing the experiment in motion.