St Andrew and the Saltire

St Andrew is Scotland's patron saint and his Saltire (X-shaped) cross is Scotland's flag. Discover more about how he has been represented through the centuries.

This St Andrew's Day, we want to take you on a journey. Travel from Edinburgh to outer space via St Andrews through the stories of five objects relating to Scotland's patron saint in this video.

The cult of St Andrew came to the east of Scotland from Europe in the 9th century. It was distinct from the early Celtic church, which came from Ireland, and the traditions of the different groups of peoples who had lived here in earlier centuries.

The cult soon became well established, and many people went on pilgrimages to St Andrews, its centre. Pilgrims believed that the relics of St Andrew had been brought there by St Rule. According to legend, St Andrew, one of Christ's disciples, was crucified on an X-shaped cross. 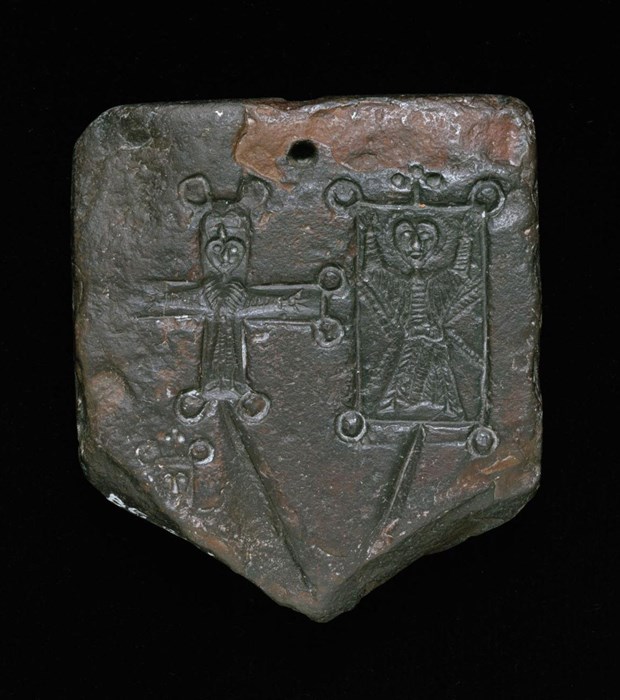 Above: 14th-century pilgrim's badge mould found in the churchyard of old St Andrew's Church in North Berwick. Badges signified that the wearer had visited a place of pilgrimage.

By the early 14th century, St Andrew was recognised as 'patron and protector' of the Scots, replacing St Columba. His symbol, the Saltire, was adopted as the national emblem. It was carried at the field of Bannockburn in 1314 along with the Brec Bennoch of St Columba, which has in the past been associated with the Monymusk reliquary, also in the National Museum of Scotland. 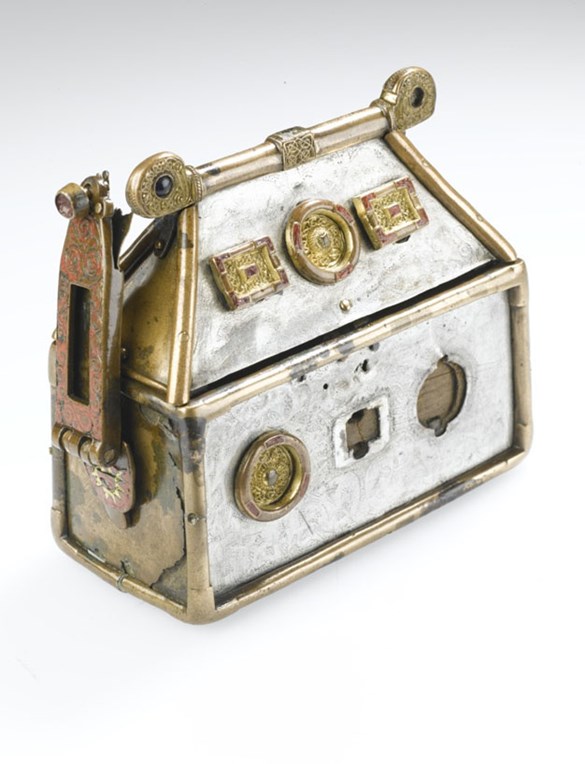 Above: In the 19th century the Monymusk reliquary was thought by some to be the Brec bennoch of St Columba. However, recent research has questioned this tradition. 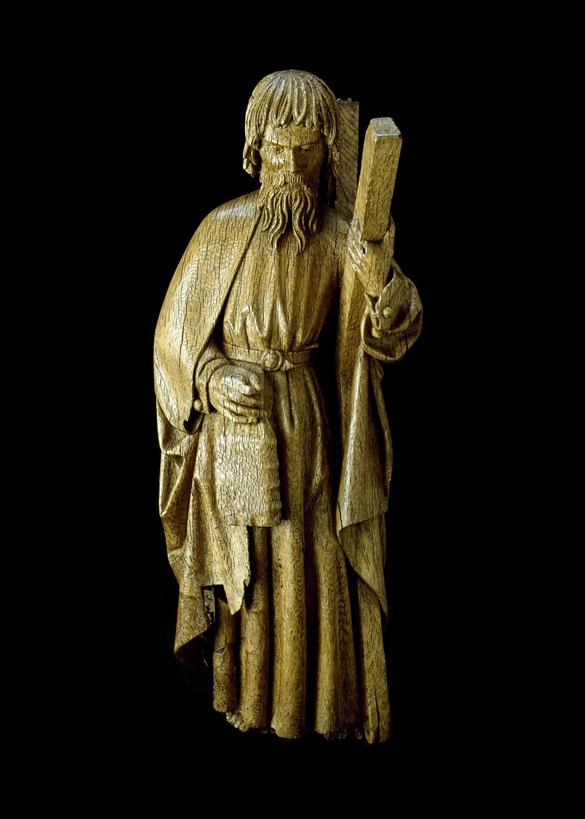 Above: Oak figure of St Andrew, on display in the Kingdom of the Scots gallery at the National Museum of Scotland.

This oak figure shows the saint dressed in long robes belted around the waist, carrying his cross in his left hand and a book in a pouch in his right hand. It was made in Northern Europe, possibly in the Low Countries, c.1500, and was probably once part of a screen or altarpiece.

Throughout the National Museum of Scotland you'll find various representations of St Andrew and his symbol, the Saltire. To one side of the oak figure you'll find a blue silk Saltire flag, said to have been carried at the Battle of Dunbar in 1650, when Scottish forces loyal to Charles II faced Oliver Cromwell's Parliamentarian army. Further into the gallery a painted wood ceiling boss from Linlithgow Palace portrays a unicorn carrying an early version of the Union Jack, with the Saltire clearly visible within the union flag. 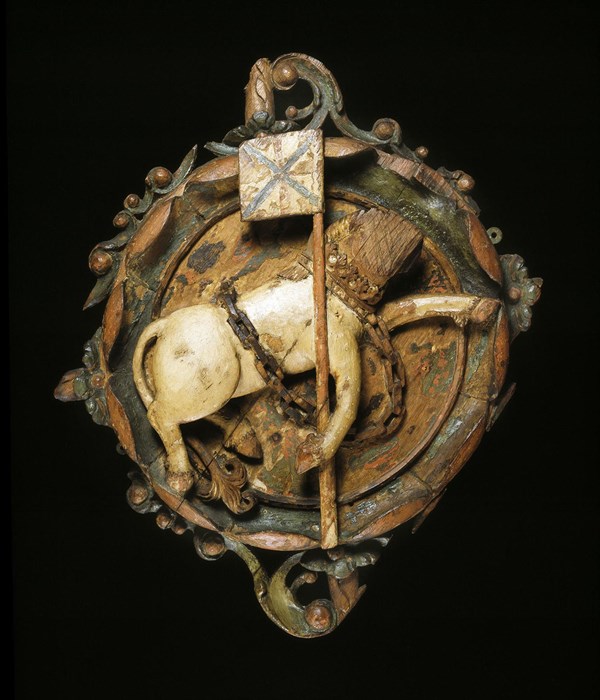 Images of St Andrew are also found in our Jacobite collection, in particular on these badges of the Order of the Thistle, the greatest Order of Chivalry in Scotland. The Order was established by James VII and II in 1687, to reward Scottish peers who supported his political and religious aims. After his exile to France, the deposed King continued to use it to encourage loyalty among his supporters.

The Order continues today and you can find out more about it here. 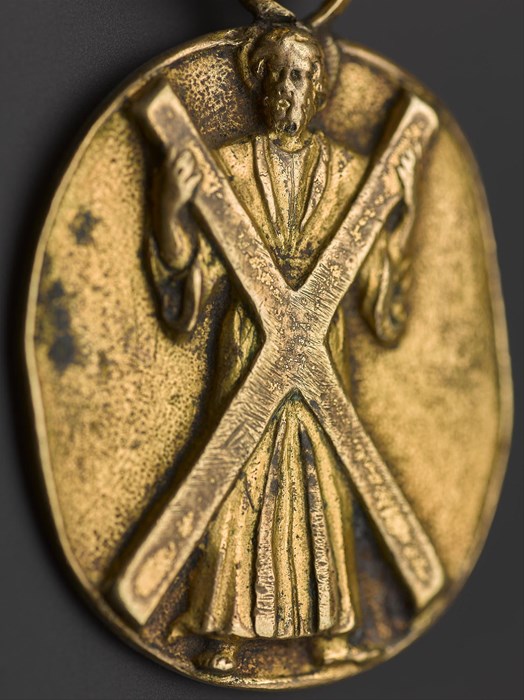 Above: Oval badge of gilt brass, featuring images of a thistle head and the figure of St Andrew, associated with the Order of the Thistle. Made in the late 17th – early 18th century. 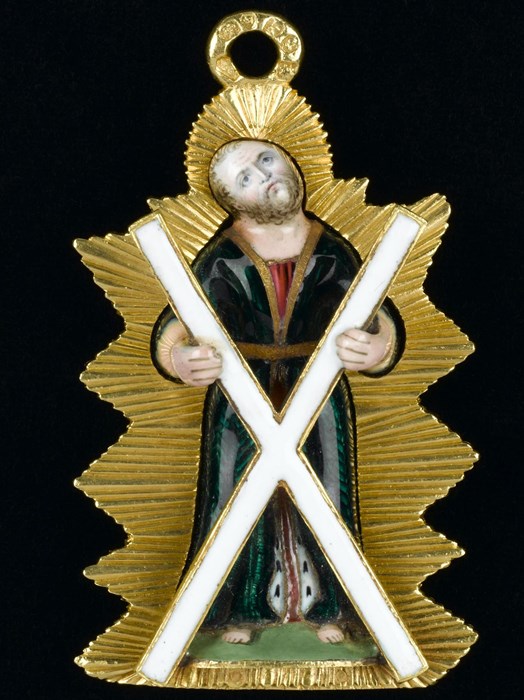 Above: Gold and enamel pendant badge of the Order of the Thistle, made by John James Edington, London, 1825–26.

You can find out more about the Collar of the Order of the Thistle in this short film.

The inscription on the blade of this broadsword, made around 1715, shows St Andrew and proclaims support for the Jacobite cause. 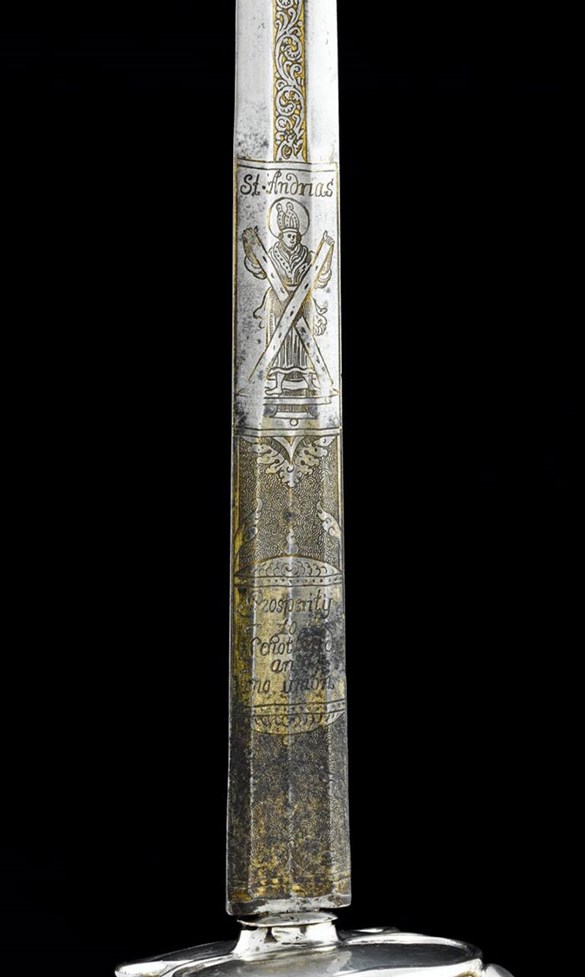 Above: The inscription on this Jacobite broadsword reads: ‘Prosperity to Schotland and no Union’ and ‘For God my Country and King James the 8’. Above it is an image of St Andrew.

This lavish travelling canteen or picnic set, presented as a gift to Prince Charles Edward Stuart by a Jacobite supporter, features St Andrew on the lid. 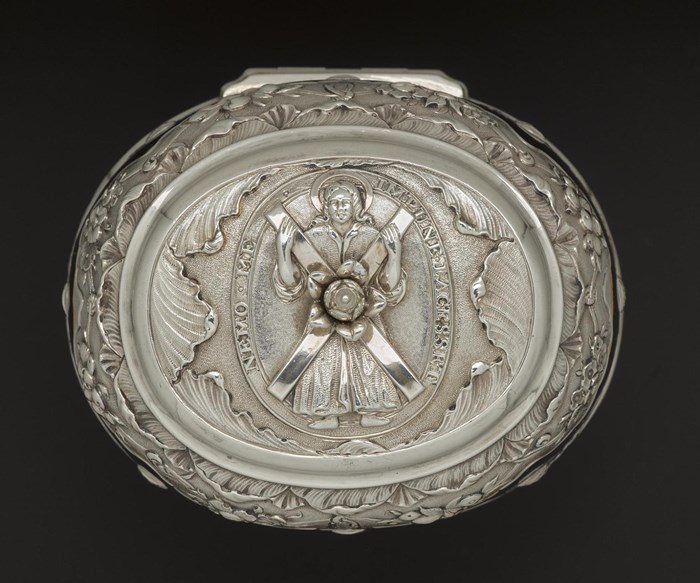 Above: Silver travelling canteen made by Ebenezer Oliphant c.1740-1749.

The canteen is emblazoned with symbols representing the Prince's position, including the three feathers of the Prince of Wales and a pattern of thistles – the Prince was made a Knight of the Thistle shortly after his birth in 1720. 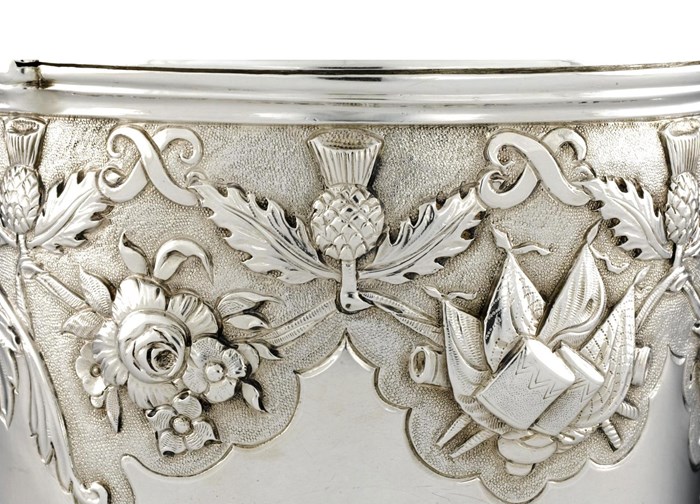 Above: Thistle pattern on the travelling canteen. 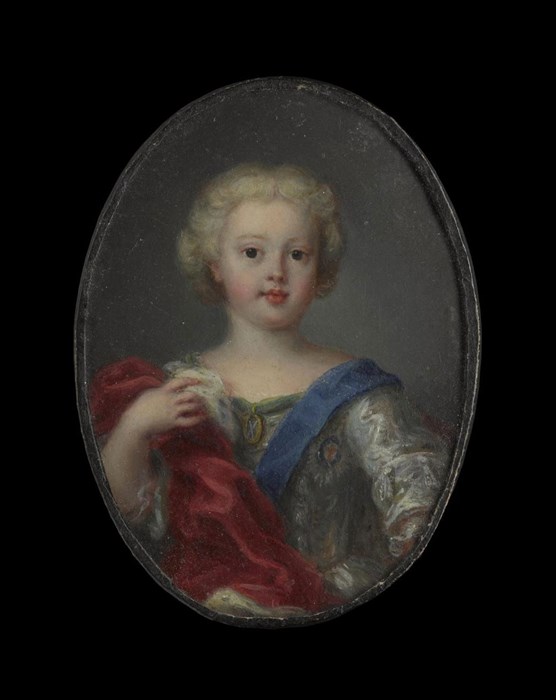 Above: These paintings of Prince Charles Edward Stuart as a child show him wearing an Order of the Thistle badge. 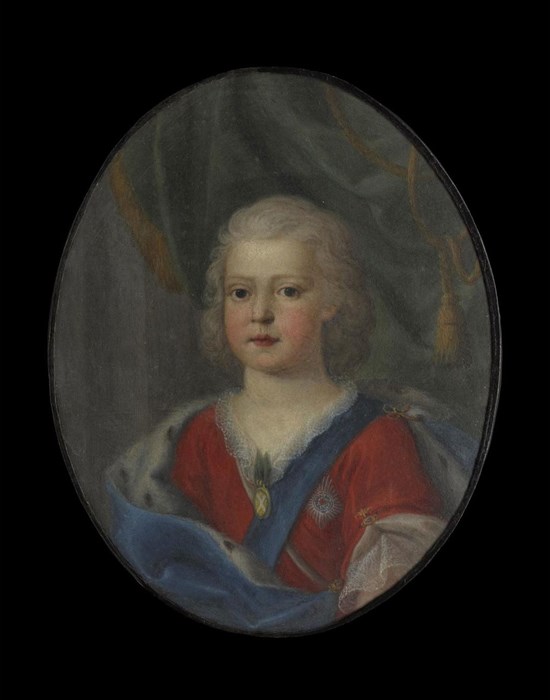 Bonnie Prince Charlie was keen to emphasise his Scottish roots to encourage support, dressing in tartan during his ill-fated time in Scotland, which ended with his defeat at the Battle of Culloden. 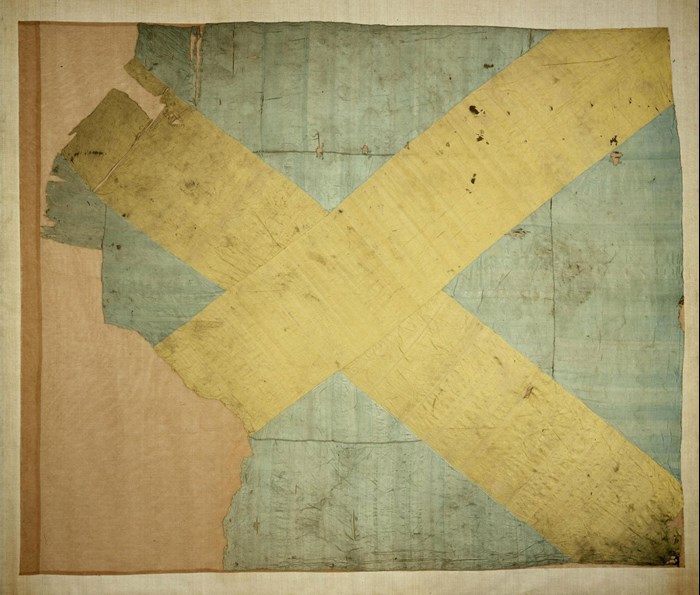 Above: This rare Jacobite colour, or flag, was carried by the Appin Stewart Regiment at the Battle of Culloden, a battle which saw the defeat of Bonnie Prince Charlie and the Jacobite cause.

For centuries the Saltire has been used as a symbol of the Scottish people, and it continues to represent the nation today – on earth and in space! This flag was flown at Holyrood and then taken on space shuttle mission STS-116 to the International Space Station by astronaut Nick Patrick, whose mother came from Skye. 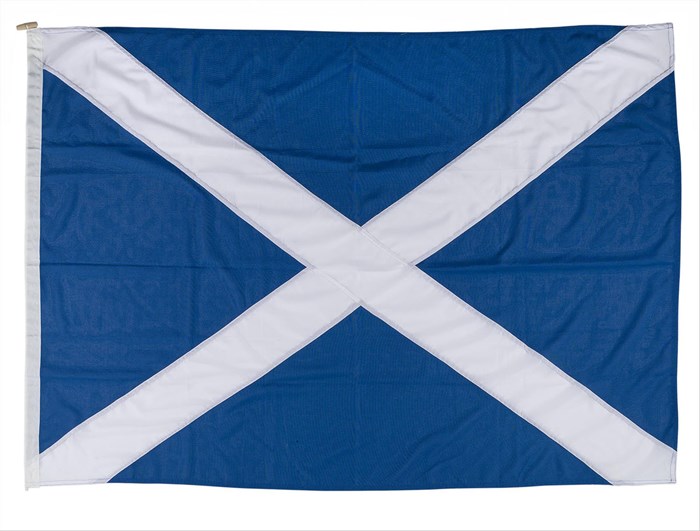 Above: Scottish Saltire flag taken to the International Space Station from 9 to 22 December 2006. On display in the Earth in Space gallery at the National Museum of Scotland.

You can see more objects from the collection featuring St Andrew in this slideshow.