You are here Home > Collections and research > Collections departments > Scottish History and Archaeology department > Ella Paul
Ella assists with the running of the Treasure Trove Unit. 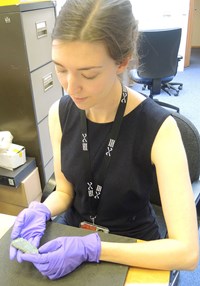 Ella holds an undergraduate degree in Ancient and Medieval History and an MSc in Classical Art and Archaeology from the University of Edinburgh. Before taking up her position as Treasure Trove Officer, she also volunteered with the curatorial team in the World Cultures department at National Museums Scotland and studied for a short time at the British School at Athens.

Ella is heavily involved in the daily running of the Treasure Trove Unit. While interested in small finds generally, her current research is focused on seal matrices and what they can tell us about personal identity in Scotland c. 1200-1700. She is also interested in the research potential of Treasure Trove data and making this information more widely accessible. She is particularly pleased to be involved with the Treasure Trove Unit’s outreach programme and enjoys engaging with the metal detecting community and wider public.

Treasure Trove
Back to top