Romans in Scotland: the Roman army

People often wonder how the Roman army coped with Scottish weather, but very few soldiers came from the warmth of Italy! The frontier troops were drawn from many corners of the vast Roman Empire and were well used to fighting in all weathers and all terrains.

The Roman army was split into two types of soldiers. The legionaries were the heavy infantry. They were citizens of Rome, recruited originally from around the Mediterranean. Specialists in set-piece battles, they were heavily armoured, typically with a javelin (pilum), a short stabbing sword (gladius), armour of overlapping iron strips (lorica segmentata), an iron or bronze helmet, and a rectangular wooden shield. They were involved in the initial conquest and in specialist work such as fort construction.

During the first invasion of Scotland, a fortress was built to house a legion of 5000 men at the northern edge of the conquered area. This was at Inchtuthil, near Blairgowrie, though it was still unfinished when the army pulled back.

Most of the everyday work of manning the frontier was left to the auxiliaries, who formed the main garrison of Roman Scotland. They were initially recruited from freshly-conquered areas. Young men were sent away from their homelands to fight for Rome and, over the years, sons followed fathers into the army. They came from all around the Roman world: units that served in Scotland were raised originally in France, Spain, Belgium, Bulgaria and Syria. 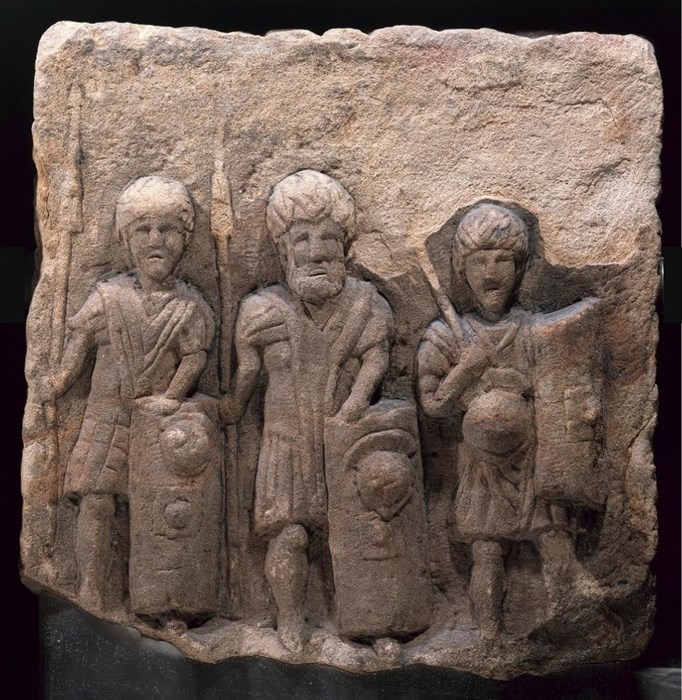 This slab showing three legionaries, found on the site of a Roman fort along the Antonine Wall at Croy Hill, conveys the camaraderie of army life on the frontier (X.FV 43).

The auxiliaries included both infantry and cavalry units, 500 or 1000 strong. Cavalry units were particularly useful on the frontier, as they could range far and wide to scout out an area. Roman cavalry were a formidable fighting force. Both horses and riders were decked out in fittings that gleamed and rattled as they charged, creating a terrifying effect. They threw their light javelins before charging with lances or slashing swords. Flexible armour of interlinked iron rings or brass scales gave the rider good protection, along with their helmet and oval shield. Hours and hours of training allowed man and horse to work in unison.

This style of fighting with massed ranks of professional soldiers was very different from the warriors of the Iron Age. The Romans had other advantages, too: weapons that could kill at a distance. In the Iron Age, warfare was conducted at sword-point or javelin throw, where you could see an opponent’s eyes. The Roman army used arrows and slingshots which could kill an enemy over a hundred metres away. Heavy artillery could be brought up for assaults. Ballistas fired bolts and stone balls for several hundred metres.

With specialist, professional, well-armed soldiers, the Roman frontier army was a formidable opponent. 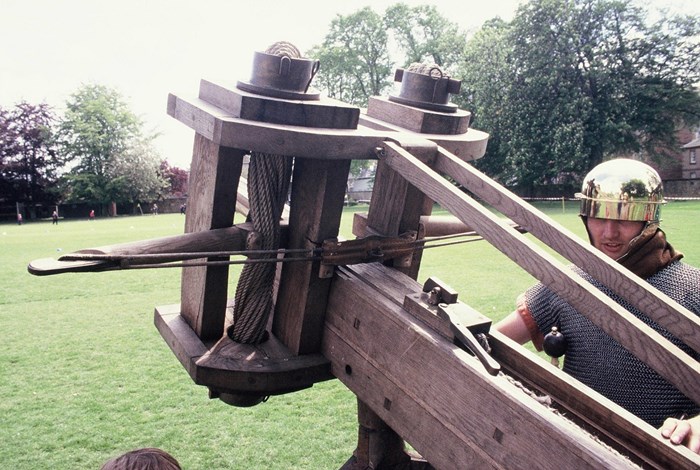 A re-enactor loads a ballista, a piece of long-range, anti-personnel artillery. © Fraser Hunter 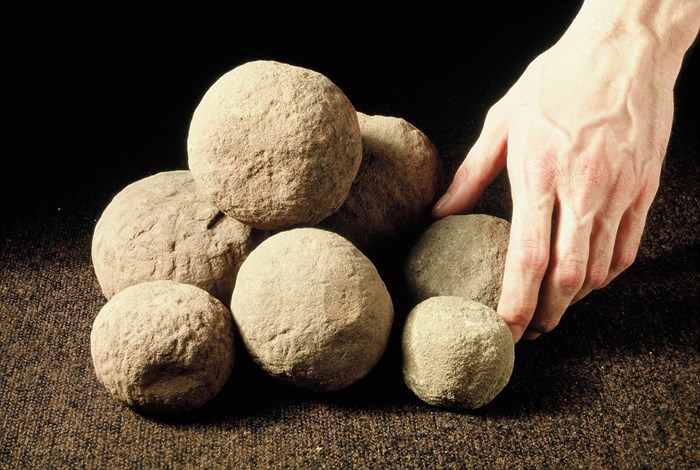 Stone balls hurled by Roman ballistae varied in size, but all were large enough to cause mortal wounds.

A hungry army is a rebellious army. The Roman hierarchy needed to make sure they kept the troops fed and watered. Good supply chains were critical to success. 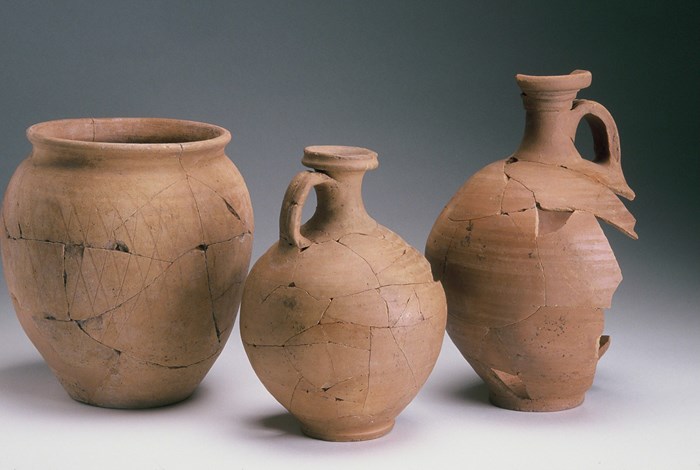 A pottery jar and flagons made at the Roman fort of Inveresk. 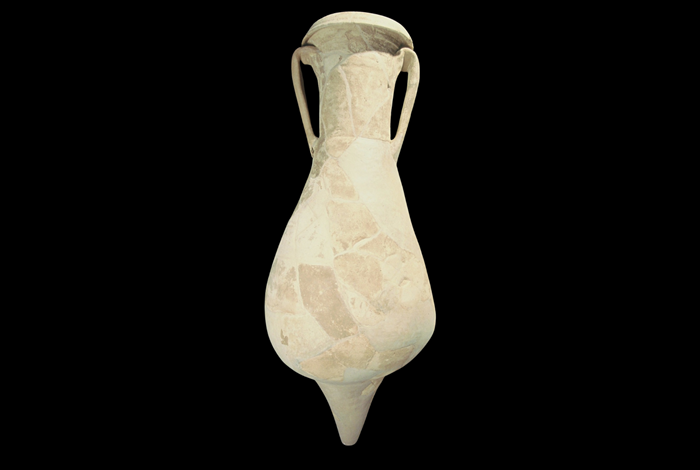 An amphora found at the mighty legionary fortress of Inchtuthil overlooking the River Tay. Originally, it held a spicy fish sauce from southern Spain (X.FY 459).

In the early stages of conquest, almost everything was imported. Supplies came in mostly by ship and were then moved by road. We can see these supply routes from the distinctive styles of pottery. This was a minor part of the cargo (food, such as wheat, was the critical thing) but pottery survives very well, and the shape of a pot and type of clay are distinctive to particular areas. This means they can reveal the supply networks.

To make it more self-sufficient, the unit would try to find local supplies. Food was grown around the fort. Meat might have been requisitioned from local farmers, or taken as tax in kind. Craftworkers within the garrison would make and repair essentials, such as weapons and building materials. Enterprising civilian potters moved north to make pots for the army.

However, there are some things you just can’t grow locally. Scotland is not natural wine-growing country, and this had to be imported from France and the Mediterranean. Olive oil for cooking and lighting was imported in vast quantities in amphorae from Spain.

All this trade relied on money to keep it moving. The Roman army would commission some things directly and deduct them from the soldiers’ wages. Other things were bought by the soldiers themselves. Their money kept the garrison town vibrant. 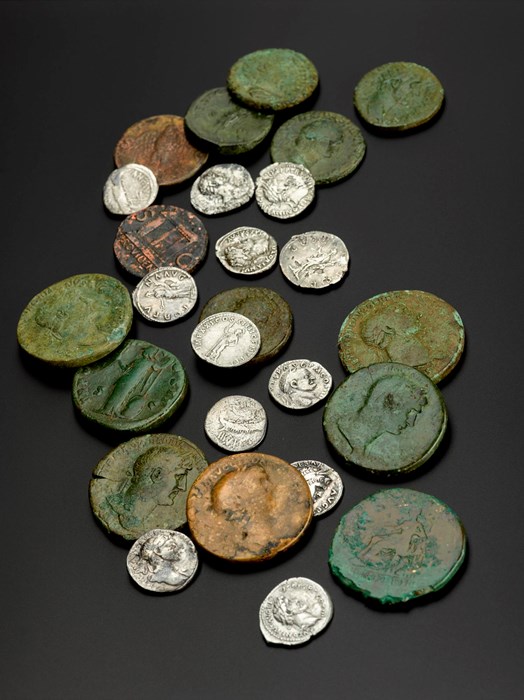 Remarkably modern in appearance, coins like these from Newstead were an integral part of the economy and day-to-day life on the Roman frontier.