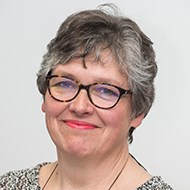 Ann Allen was, until recently, the Executive Director of Estates and Commercial Services at the University of Glasgow. A Chartered Surveyor with over 35 years’ experience, Ann has worked for such organisations as John Lewis; HBOS and UK Government.

She is Chair of the Scottish Board of Women in Property.

Ann received a Regional Director of the Year award from the Scottish Institute of Directors in 2018, she was awarded an MBE in the 2018 New Year Honours List for services to Higher Education and in February 2019 she received the Business Leadership Award at the Scottish Property Awards.

Ann became a Trustee of National Museums Scotland in April 2017 and her term of appointment runs until March 2021. She lives in York.

2020 Register of Interests
Back to top