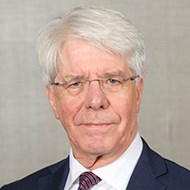 Professor Ian Wall brings decades of experience in property development/management and in Public Engagement in Science (PES). Before retiring he was CEO of The EDI Group responsible for many development projects, including Edinburgh Park.

Ian has chaired two Committees on STEM education for the Scottish Government and was previously a member of the Heriot Watt University Court, Chair of WASPS and the Scottish Poetry Library, a non-executive director of SheIter, and visiting Professor of Architecture at the Scott Sutherland School of Architecture, in Aberdeen. Ian is currently Chair of the Scottish Council for Development and Industry (SCDI), a Trustee of the Royal Botanic Gardens Edinburgh and of Newbattle Abbey College, a non-executive Director of Scotland’s Regeneration Forum (SURF), Visiting Professor at Heriot Watt University and a Board Director of the Edinburgh International Science Festival, the latter which he invented. He is a Fellow of the Royal Society Edinburgh and the Society of Antiquaries of Scotland.

Ian became a Trustee of National Museums Scotland in April 2021 and his term of appointment runs until March 2025. He lives in Edinburgh.