You are here Home > Collections and research > Our research > Current research projects > Egypt's Dispersed Heritage
Explore the legacies of the British archaeology in Egypt and the dialogue being created around these collections.

From the 1880s to the 1980s hundreds of excavations were carried out across Egypt by British organisations. While many of the objects they discovered remained in Egypt, a large proportion were distributed to around 350 museums in 27 countries across the world. No other area of archaeology has a material legacy on this scale and, as such, ancient Egyptian collections have become some of the most popular in museums worldwide. The AHRC-funded project ‘Egypt’s Dispersed Heritage: views from Egypt’, which is partnering with National Museums Scotland, seeks to communicate this history of dispersal and create opportunities for dialogue with modern Egyptian communities. 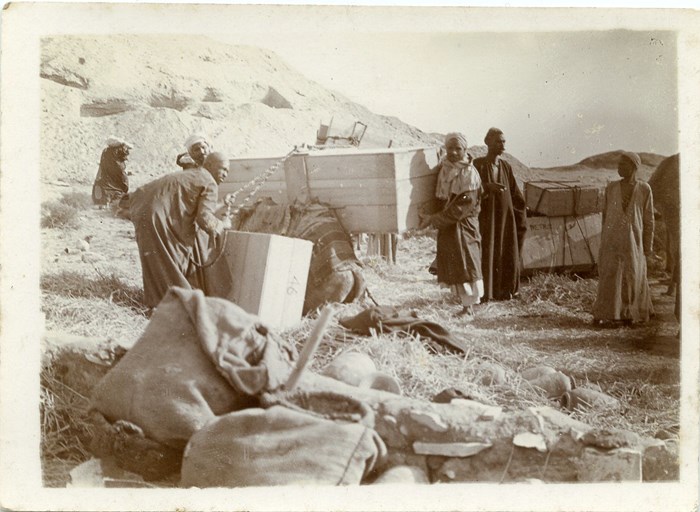 Finds from Grenfell and Hunt’s Egypt Exploration Fund sponsored work in the Fayum, 1901, being crated and loaded onto a camel for transport. Courtesy of the Petrie Museum of Egyptian Archaeology, UCL.

In this podcast, you can experience our ‘Egypt, Past and Present in Dialogue’ event held at the National Museum of Scotland on 22nd February 2020. This event explored the legacies of British archaeological practices in Egypt at the first panel discussion of the ‘Egypt's Dispersed Heritage’ project chaired by journalist, writer and broadcaster Samira Ahmed, featuring National Museums Scotland's Margaret Maitland, Principal Curator of the Ancient Mediterranean, and Egypt’s Dispersed Heritage project researchers Heba Abd el Gawad and Alice Stevenson. Supported by the Arts & Humanities Research council. Listen to the podcast now in the player below: 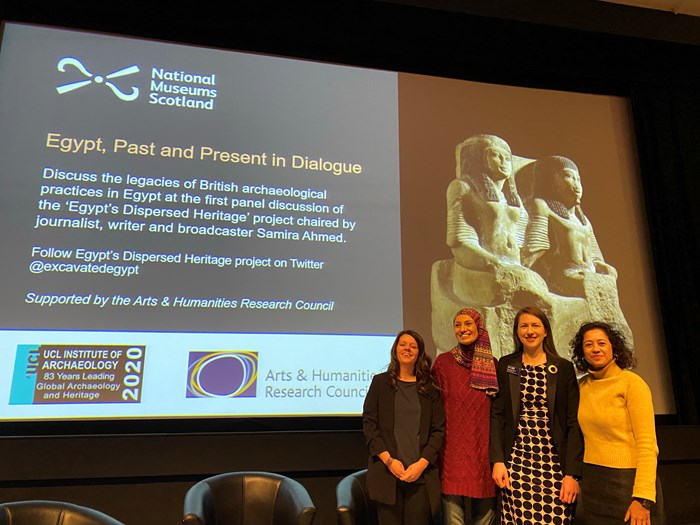 Little attention has been given to the impact of colonial legacies on modern Egyptian communities, but there is a demonstrable interest for better information in Egypt about how artefacts were excavated and exported. The ‘Egypt’s Dispersed Heritage’ project is sharing this information and fostering dialogue to transform and amplify Egyptian narratives around these collections and histories. At the same time, the project hopes to transform awareness in the UK of modern Egyptian interest in its heritage.

National Museums Scotland has been participating in online engagement with Egyptian communities by sharing images and information about its collections in collaboration with project researcher Heba Abd el Gawad. Project participants – students and recent graduates in Cairo – shared their personal responses and/or created their own new labels for these objects.

Their responses showed their interest and engagement, especially with less familiar objects of ancient Egyptian material culture like this wooden statuette. 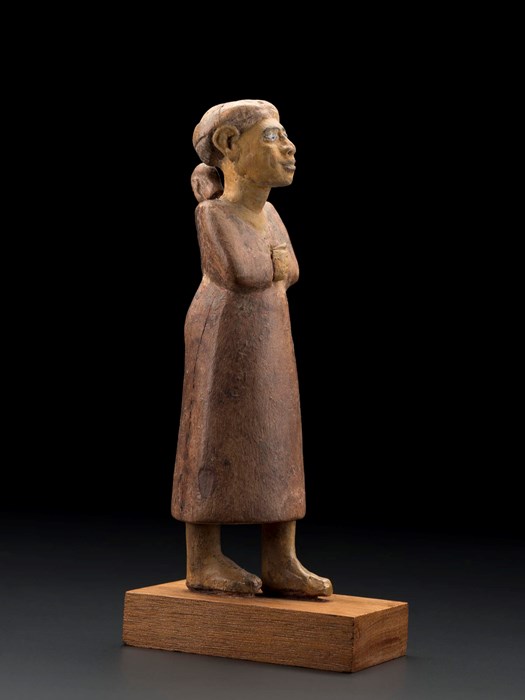 The project participants brought a uniquely Egyptian sensibility to how they saw the objects, for example writing labels comparing the statuette to the famous and beloved Egyptian singer, Um Kulthum (1904-1975).

Through various creative outputs, the project is amplifying the voice, visibility, and validity of modern Egyptian communities through a programme of interventions co-designed, developed, and delivered with them, including street performances, comic strips, and educational resources all in Egyptian Arabic.

Project researcher Heba Abd el Gawad has been collaborating with cartoonist Mohammed Nasser (@Nasser_Junior on Twitter) and has created a series of comics addressed at audiences in Egypt, including this one featuring a statue in National Museums Scotland’s collections. Representing a Chief of Police and his wife from the city of ancient Thebes (modern Luxor), it was excavated in 1857 by Alexander Henry Rhind. The comic created by Nasser uses the self-isolation response to COVID-19 as symbolic reference to the isolation of ancient Egyptian objects from modern Egyptian communities in museum displays. 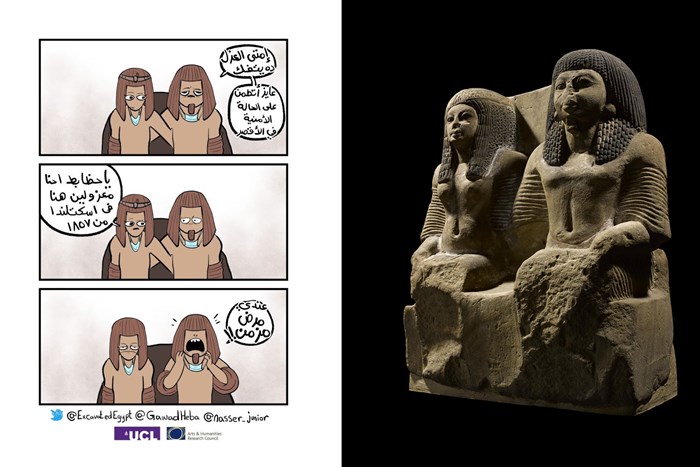 Translation of the comic’s captions from Arabic:

Chief of Police (frustrated): ‘When will this social isolation be over so I can follow up on Luxor’s security condition?’

Chief of Police (terrified): ‘I have chronic illness??!!’

The comic was accompanied by commentary from Nasser and Heba (translated from Arabic): ‘Ancient Egypt in Western museums can be seen as an orphaned culture, a concept not a culture, frozen in time and place isolated from Egypt's later history layers. Thus, foreign visitors - when asked - tend to be disinterested in Egypt's later history and assume modern communities are disengaged from its past. What do you all think? How do you think this can be resolved?’

‘More information on this statue can be found here. @NtlMuseumsScot has been taking thoughtful and active measures to increase the representation of modern Egypt's people and places within their ancient Egypt gallery through digital media. You can watch one of the films on display here’ [see below for more on this film].

Another comic was inspired by May Hossam’s identification of the wooden statuette of a woman in the NMS collection with the legendary Egyptian singer Um Kulthum. While addressing the statuette’s removal as part of the distribution of artefacts from John Garstang’s University of Liverpool excavations at Beni Hassan, it also re-Egyptianizes the statuette by presenting it within a thoroughly Egyptian frame of reference. 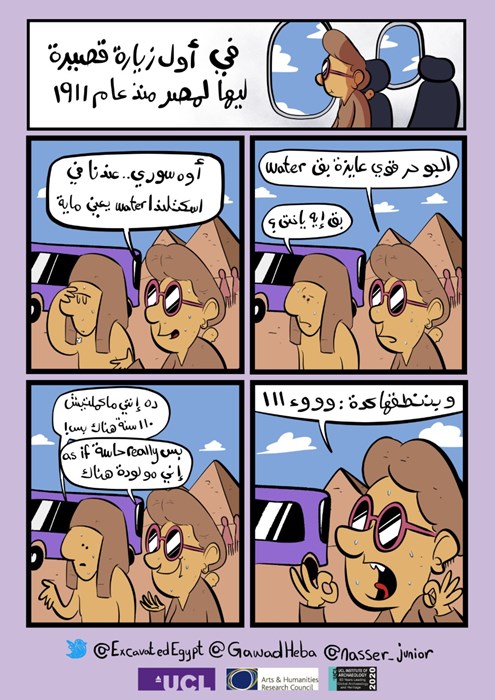 Translation of the captions:

3. B (Egyptian object which never left Egypt): Excuse me, some what??

The subtext of the comic is autocolonialism. Travelling abroad, particularly to any Western country, is a source of pride among Egyptians, often leading to strong identification with those places. The comic plays on this idea of Egyptians who have been Westernized through travel to make the comic relevant to Egyptians' sense of humour, but its wider aim is to open up discussion about how Egyptology is Eurocentric, which has Westernized how ancient Egypt is perceived.

For more on how Nasser and Heba produced these comics, check out their interview with Digital Hammurabi and their discussion panel for Everyday Orientalism.

Reconnecting Egypt Past and Present 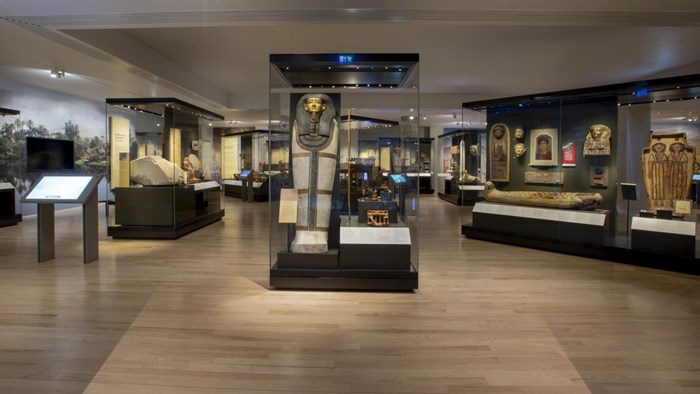 The Ancient Egypt Rediscovered gallery at the National Museum of Scotland examines the complexities of British collecting and excavation in Egypt and seeks to redress the disconnect in previous museum displays between ancient Egypt and Egypt today. Situated amongst rich images of Egypt’s living landscapes, the gallery highlights Egyptian voices both past and present. 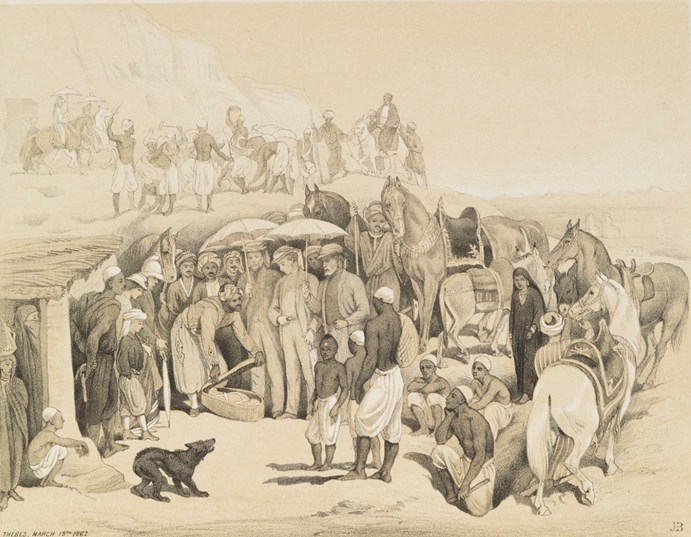 The Prince of Wales (Edward VII) observes the discovery of a coffin on the West Bank of Thebes. Illustration by Jemima Blackburn.

For example, in the 19th century, as European nations competed to collect impressive treasures, Egypt was put under diplomatic pressure to give access to its antiquities. This coffin of a man named Amenhotepyin now in National Museums Scotland is one of nineteen collected by the Prince of Wales on a visit to Egypt in 1869. The coffins of Amenhotepyin and several family members were gathered together in a tomb for the prince to ‘discover’. His ‘finds’ were taken to Britain and distributed to different museums throughout the country. Amenhotepyin’s wife, Irterau, is in the Pitt Rivers Museum, Oxford and their son Pakepu is in the Fitzwilliam Museum, Cambridge. 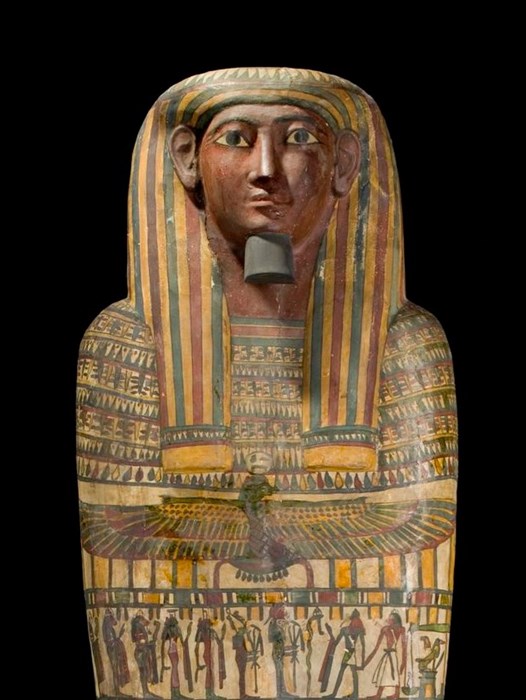 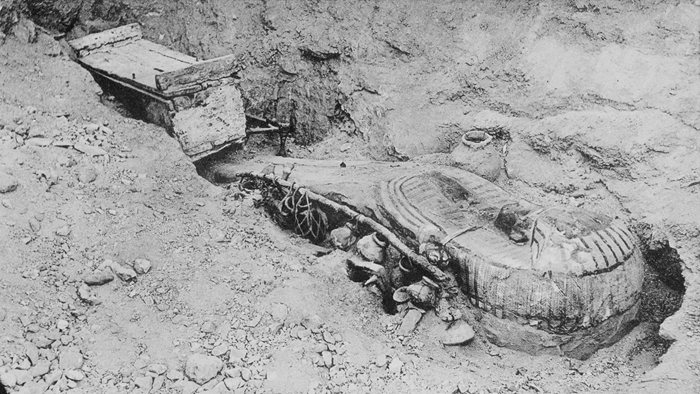 The ‘Qurna Queen’ burial during excavation by archaeologist Flinders Petrie in 1908.

Excavation in Egypt has changed slowly over the past hundred years, since William Matthew Flinders Petrie (1853–1942) set the standard for systematic archaeology. Although Petrie is often lauded as the ‘Father of Egyptian Archaeology’, his work relied on Egyptian excavators, who received little acknowledgement for their contributions. Today, Egyptian archaeologists lead their own excavations and more work is being done to involve local communities in Egypt through outreach activities. Watch this short film from the Egyptian gallery at the National Museum of Scotland to learn more about changing archaeology in Egypt.

Colonial histories and legacies in our museums
Find out more

The Victorian Queens of Egypt