You are here Home > Collections and research > Collections departments > World Cultures department > Victoria Adams
Victoria (Tori) Adams is the Assistant Curator responsible for collections from Oceania, Africa, and the Americas. 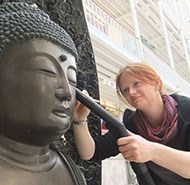 She works across the collections from Oceania and Africa, with a special interest in the Americas, and specifically Peruvian archaeological textiles and ceramics; indigenous art; and museological collaborations with source communities.

Victoria was a key team member for the newly opened 'Ancient Egypt Rediscovered' gallery, and contributed significantly to the highly popular The Tomb, ancient Egyptian Burial exhibition in 2017, and in another role to Photography: A Victorian Sensation in 2015. She has written several blogs and collections stories, and with Frederike Voigt published a chapter on a ‘Collecting Scottish-Yemeni History’.

Victoria’s academic background is in Art History and Literature from the University of York, and a multi-disciplinary MA in Medieval Studies passed with distinction. She specialised in representations of humans and animals inhabiting the margins of European medieval art and society. She continues to be interested in the migration and exchange of religious, secular and mythological imagery and symbolism across cultures and social and political systems.

Victoria was fully funded by the AHRC for the MA in Museum Studies at the University of Leicester, where she focused on issues of identity and ownership in displays of Indian art. Subsequently she worked with world cultures collections as Assistant Curator at Brighton Museum & Art Gallery, the Royal Armouries, and The Russell-Cotes Art Gallery & Museum.

In 2019 Victoria was awarded a Conference Travel Fellowship to attend the Association of Art Museum Curators (AAMC) & AAMC Foundation 2019 conference in New York City. Subsequently she successfully gained follow-up funding to meet curatorial colleagues in various institutions in Toronto and Ottawa, to discuss collaboration with indigenous communities in interpretation and display. See her blog on this trip here. 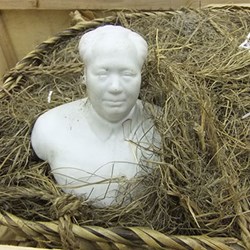 From unpacking a crate full of mini Mao statues to investigating historical chemicals, Victoria takes us behind the scenes.
Read
Back to top