From January to April 2017 Josie Dear, a work placement student from the University of Glasgow's Dress and Textile Histories MLitt programme, worked with Assistant Curator Rosanna Nicolson to survey dress and textiles from Myanmar (Burma), Thailand and Laos. The project has surveyed approximately 170 items in the National Museums Scotland collection, with a focus on cultural groups from highland regions, including the Akha, Karen, Kachin, Chin, Shan, Lisu, Yao (Mien), Hmong (Miao) and Tai. All have been photographed and measured, as well as physically numbered and re-stored where required. 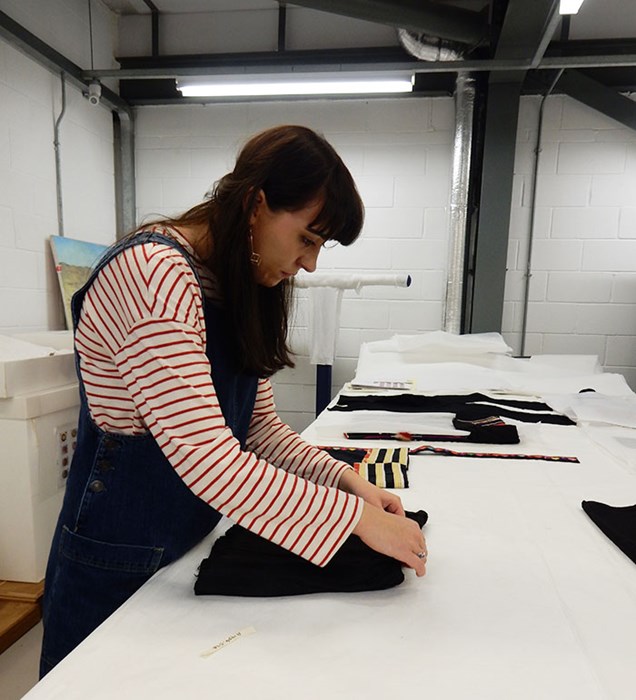 Above: Josie Dear working on the May Wilson collection at the National Museums Collection Centre.

As a result of this project, we now know a lot more about this area of the collection. It has been acquired through a range of people including missionaries, serving officers in the military, individuals who lived, worked and travelled in the region such as ethnomusicologist Jean Jenkins, dealers, and colonial administrators like as Sir J. George Scott (1851 – 1935). In 'Burma: A Handbook of Practical Commercial and Political Information' (3rd Edition Revised, 1921) Scott writes:

"The early missionaries set themselves to the work with more zeal than discrimination, or study of the language. Their clans read like a table of fashion plates or a history of tartans. The only visible distinction between one clan and another was the dress worn." (p.122)

Some of the earliest pieces were given to the Museum by the Royal Society of Edinburgh in 1859, and another group accessioned in 1912 have now been identified as an earlier 1871 loan from zoologist/naturalist Dr John Anderson (1833 - 1900), which may have been collected by him during an expedition through Myanmar (Burma) to Yunnan province, China in 1867.

The initial starting point for the project was a collection of Akha costume from northern Thailand purchased by the Museum in 1984. They were collected by May Wilson (b. 1947), originally from Larkhall, south of Glasgow, who travelled to northern Thailand with the Overseas Missionary Fellowship (formerly China Inland Mission) in the mid-1970s, after completing her Thai Studies and was eager to live in an Akha village and to learn the language. As well as the objects she collected, May Wilson also compiled a photograph album documenting her time in Thailand, which is rich source of supplementary information and has now been digitized as part of this project (D.2017.5.1-32. Josie Dear has also produced a detailed catalogue.

The slideshow belows shows photographs from May Wilson's photograph album.

The OMF began working with Akha in Thailand in the 1950s, with the first conversion to Christianity in 1962, and a Protestant Christian village was established in Chiang Rai Province, called Elephant Valley by foreign missionaries and Ho Sa by the Akha. A Silver Jubilee was held in 1987, a year after May Wilson married Swiss OMF missionary Robert Mosimann, who were both in Thailand until the early 1990s, when they returned to Switzerland.

May Wilson published a children's book titled 'Smoke Away' in 1981. The description on the back cover reads: 'A pa lived in a Christian village in North Thailand. HE liked to show off … and he had other problems too. His parents smoked opium. That was a big problem, as you will find out when you read this book.' Kammerer (1990) in her article 'Customs and Christian Conversion among Akha Higlanders of Burma and Thailand' writes:

"As missionaries have long recognized, one reason Akha convert is to escape addiction by entering the supposedly opium-free environment of a Christian community." (1990:287)

A significant part of May Wilson's collection is female Akha dress and accessories. Although many have converted to Christianity since the 1960s, they continue to dress in typical Akha style clothing. The production processes, including spinning and weaving on a back strap loom, involved in making Akha textiles, which are predominantly performed by women, are documented in the photograph album. Most of the textiles are dyed blue-black using indigo or a similar plant, and then richly decorated with embroidery, applique, cowrie shells, coix seeds, buttons, tin, silver, coins, monkey fur and feathers.

The slideshow below shows items from Wilson's collection.

There is a detailed description of an Akha girl's costume in her book:

"In keeping with Akha custom, Bu yo was dressed in her very best to go visiting. She was sorry that the big 'silver' medallions hanging around her neck were only made of tin, but she did have two, as well as a flat metal necklet and a broad bangle on each arm. The tiny accordion pleats at the back of her skirt swung from left to right and back again as her bare brown legs took her up the hill, and the tinkle of tiny bells strung across her hips made music in the heavy heat. She didn't seem to be in the least hampered by the outsize shopping bag which she was carrying Akha-fashion, straps across her forehead and the bag resting on her back. It was as well she was wearing he head-hugging Akha cap, to give some protection from the sun which was beating down on them. Bu yo would never think of visiting another village without her hat. Like every other girl of her age she was very conscious of her appearance and, the day before, had carefully washed the red-dyed chicken feathers and the coins which decorated it. The bobble of monkey-fur on the crown had been combed out to lovely fullness, and all this made up for the rather thread-worn material of which the hat was made." (1981:11).

This work placement project has been an excellent opportunity to look at one area of the textile collection in more detail, and has established a fruitful connection with the University of Glasgow's students. We would welcome and encourage similar projects and research visits to study the collection in greater depth in the future.

Cohen, Erik. 1988. 'From Tribal Costume To Pop Fashion: The "Boutiquisation" Of The Textiles Of The Hill Tribes Of Northern Thailand' in Studies in Popular Culture, Vol. 11, No. 2, pp. 49-59

Kammerer, Cornelia Ann. 1990. 'Customs and Christian Conversion among Akha Highlanders of Burma and Thailand' in American Ethnologist, Vol. 17, No. 2, pp.277-291

Kammerer, Cornelia Ann. 1996. 'Discarding the Basket: The Reinterpretation of Tradition by Akha Christians of Northern Thailand' in Journal of Southeast Asian Studies, Vo. 27, No. 2, pp. 320-333 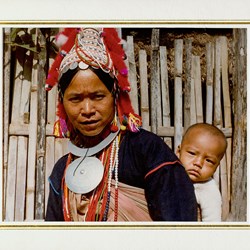 Explore a photograph album collated by Scottish missionary Mary Wilson while living and working with the Akha people in the mid-1970s to early 1980s.
Search 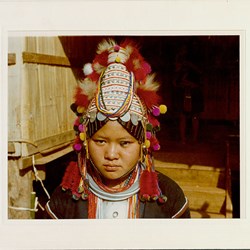 In this blog post, student Josie Dear explores the significance of the May Wilson collection of textiles and photos from South East Asia.
Read

May Wilson's photograph album in our collections database
Rosanna Nicolson

Catalogue of May Wilson's photograph album
Back to top